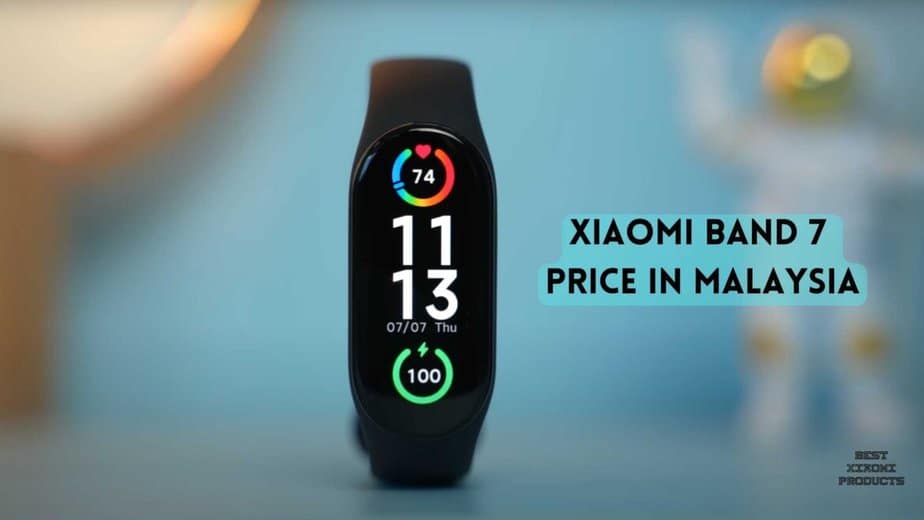 The Xiaomi Mi Band 7 improves on the hugely popular Mi Band 6 by offering a slightly bigger, brighter screen, along with better internals and a larger battery.

This meant that there is a noticeable difference between the two generations though not always visible to the naked eye. The Xiaomi Mi Band 7 like all other Xiaomi Bands, is popular and successful in all the markets it has launched.

The Xiaomi Mi Band 7 was launched in China on 24th May 2022. However, the band launched in Malaysia on the 24th of June, a month later. This is pretty much in trend as Xiaomi tends to release its smart bands later in Malaysia.

Highlights of the Xiaomi Band 7 Malaysia

A Bright Large AMOLED Screen – The new Mi Band 7 features a 1.62-inch screen which is slightly larger and brighter at 500 nits than the previous version.

Long Battery Life – The Mi Band 7 has a bigger battery that offers up to 14 days of battery life which is outstanding for a device so small.

Tons of Sensors – The Mi Band 7 has all the sensors you will ever need and want in a fitness tracker along with notifications for health metrics.

Smart features – The Mi Band 7 has tons of fitness modes with automatic activity detection that make it a good fitness tracker.

Water Resistant – With a 5ATM rating, the Mi Band 7 can be submerged for up to 50 meters in water for up to 10 minutes.

Overall, there are few fitness trackers that come close to offering the same specs as the Xiaomi Mi Band 7. And there are no bands that tick all the boxes that Mi Band 7 does in its price category. Easily one of the best fitness trackers you can buy right now.

The Xiaomi Band 7’s design is almost identical to the Mi Band 5 and Mi Band 6. The body of the Xiaomi Band 7 has the same shape as the Mi band 6, however, the body is slightly larger and heavier this generation. The display has also increased slightly so, from the front, the Xiaomi Band 7 looks different.

The pill-shaped design stays with no physical buttons, crowns, or dials. The underside has a magnetic charger for charging and houses sensors for tracking. The Xiaomi Band 7 is durable and feels great, thanks to the TPU body and strap.

The Xiaomi Band 7 is rated 5ATM for water resistance, which means the smart band can be submerged underwater for up to 50 meters for 10 minutes.

The Mi Band 7s bands can be easily replaced. The mechanism is the same as before, pop out the device and replace the band. You can find bands in multiple vibrant colors, my favorites are neon, black, and khaki.

The display is an area where the Xiaomi Band 7 improves over the Mi Band 6. The new model has a larger display which is also brighter, this is a good improvement but nothing groundbreaking. The new version also has support for always on display which is an awesome addition.

The Xiaomi Band 7 features a 1.622″ AMOLED display that is bright and vibrant. In contrast, the Mi Band 6 has a 1.56-inch display. The increase in size allows users to check text messages, calls, notifications, and more, better than ever. The display also has a brightness of 500 nits which is brighter than the Mi Band 6 at 450 nits and good enough for most situations.

See also  Xiaomi vs Huawei Smartwatch | Mi Watch vs Huawei GT2, Which one is the Best?

Overall, the display of the Mi Band 7 is simply amazing and is unrivaled in price point. It’s large, bright and AMOLED, there’s nothing more you can ask for. I love it!

One disappointing aspect is that the Xiaomi Band 7 has no upgrades in the performance department. While the performance is good, an upgrade would help make things smoother and snappier and get rid of the occasional stutter.

The Xiaomi Band 7 still is smooth and responsive. Scrolling through texts and menus is smooth, unlike most other smart bands. You can switch between watch faces in an instant too.

I will talk about the tracking performance of the Xiaomi Band 7 in this section. The Mi Band 7 is definitely better than Mi Band 6 but it’s not perfect. Xiaomi has even improved the SpO2 sensor yet it’s not medically accurate.

Given the size, I’m surprised at how good the tracking is on the Xiaomi Band 7. The band is fairly accurate for step counting and heart rate monitoring but struggles a bit when it comes to sleep monitoring. The SpO2 and heart sensor help, but it’s not as accurate as smartwatches.

The Xiaomi Band 7 is not just a fitness tracker, it’s a smart band too. This means the band comes with a host of smart features that will allow it to replace smartwatches.

To take advantage of all the features of the Xiaomi Band 7, you need to pair it with a smartphone running Android 6.0 or later or an iPhone with iOS 10.0 or later.

The Xiaomi Band 7 comes with features like music control, find my phone, call and text notifications, weather alerts, and more. All of these features work really well too.

Apart from this, the host of health fitness tracking features is just impressive. You get stress monitoring, female health tracking, breathing suggestions, and more. The Xiaomi Band 7 may be tiny, but it sure is loaded to the brim with features.

The Xiaomi Band 7 shines in the battery department too. The 180 mAh Li-Poly battery found in the band can make it last for up to 14 days. The larger battery also allows the Xiaomi Band 7 to support features like an Always-on display and Oxygen level tracking.

Depending on the features you use, battery life could reduce which is standard. The Xiaomi Band 7 uses magnetic charging which is convenient. It takes under 2 hours for the battery to get charged from 0 to 100.

Xiaomi Band 7 Malaysia – Where to Buy