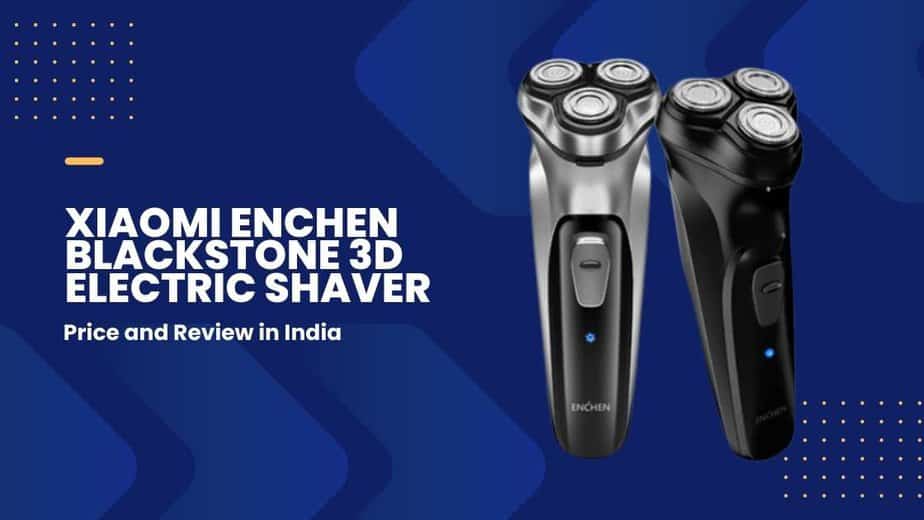 Ive been using the 1C trimmer for a little over a year and desperately needed to upgrade to one that’s a tad more powerful simply because my beard is now quite thick.

Since Xiaomi is one of my go-to brands I found it best to opt for one of their premium models, the ENCHEN Blackstone 3D Electric shaver, and boy was I stunned at how amazingly efficient this shaver is.

Let me take you through the latest Xiaomi ENCHEN Blackstone 3D Electric shaver price and review in India for a first hand account on what this shaver has to offer.

Two-in-One – The Blackstone 3D does not have just one shaving head, but two. The one on the side is ideal for beards and can be opened by pressing the switch beneath it.

Easy to Clean – The ENCHEN Blackstone 3D is super easy to clean and the head can be removed to expose the blades so that they can be cleaned as well.

The Xiaomi ENCHEN Blackstone 3D electric shaver was first launched in 2020 at a premium of 1,999 INR.

However, there has been a significant drop in price and you can now get the Xiaomi ENCHEN Electric Shaver for as low as 899/- INR on popular ecommerce websites like Amazon.

The Xiaomi ENCHEN Electric Shaver is also available at the MI store, but it’s slightly more expensive and carries a price tag of 1,899 INR.

Here are the key specifications of the Xiaomi ENCHEN Blackstone 3D Electric Shaver:

The Xiaomi ENCHEN Blackstone 3D Electric Shaver is packaged in a simple looking box that features a large image of the shaver on the front and on the back I found the specifications and features of the shaver.

Once I opened the box, there was a thin plastic tray that I had to slide out to reveal the electric shaver packed in a milky white plastic cover.

Apart from that there was nothing else within the box, not even a battery or any trimming guards.

The first thing I really liked when I opened the box was the sleek design of the Blackstone 3D Electric Shaver. It features a dual-tone hard plastic body that is lightweight and weighs  hardly 144 grams.

There’s only one button on the shaver and that’s the power button that I was able to use as a lock button to prevent the shaver from going off while on the move.

The whole design of the Blackstone 3D is to make sure that anyone can hold it with ease, so I did notice a ton of unique grooves all around.

Straight out of the box, the shaver has a hard plastic protective casing for the blades that can be removed simply by pulling it in an upward motion.

At the back of the shaver I came across an indication that the shaver is a dry shaver and that it can not be used for wet shaving and just above the print on the back is a pop-out beard trimmer that I could release by sliding down the black section underneath the blade.

The charging port is situated under the shaver and from my experience, it’s not something that I would feel comfortable charging in the bathroom.

The cutting head is removable and can be ejected with the simple press of a button on the side of the shaver.  Finally, the best part of the design has to be the tiny LED display that indicates different modes and when the battery needs to be charged.

All-in-all, the Blackstone 3D has a premium design and is built really well even though it’s only made from plastic. However, Xiaomi could have made a few changes to the design of this shaver to make it waterproof so I could use it in the bathroom without worrying,

I did not find the Blackstone 3D to be difficult to maneuver and I was finally able to cut my hair and trim my beard with ease.

It’s powered by a 5W electric motor and has 3 round cutting fouls that flex on their own axis and this prevented me from accidentally slicing against my skin.

Truth be told, the level of comfort I experienced with this shaver was way more than any other trimmer or shaver i’ve used in the past.

There were no hiccups while trimming my chin and the flex was so smooth that the shaver literally glided across my face.

Since the blades are made from stainless steel, they did tend to pull at the longer strands of hair and it was one of the few issues I faced while using this shaver across my body.

I did notice one thing though, the blades don’t fade or lose their sharpness quickly and unlike the single or double blade razors that need to be changed every few weeks, this set of 3 blades lasted a whopping 12 months with minimal maintenance and cleaning.

It’s a fantastic shaver, but when it comes to performance, it could have been made to perform better. There’s no alternating speeds and it’s not waterproof, so it took longer to use on thicker patches of hair and I could not use it while having a shower.

In terms of battery backup it’s pretty sufficient depending on what you want to shave and how much there is to shave.

The shaver came with a half charged battery and I had to first fully charge it before I could  give the shaver a try. It didn’t take long to fully charge and the first attempt took me approximately an hour for the battery to fully charge.

A single full charge lasted me up to an hour and was more than enough for my needs. But since there are other shavers that can go on for 2-3 hours at a stretch, Xiaomi could have either improved the battery capacity or provided it with fast charging capabilities.

However, it does have a USB-C charger that’s capable of charging the Blackstone 3D to full capacity within 90 minutes, so it’s kind of a win since it’s significantly faster than the old-school microUSB chargers which would have probably taken upwards of 2-3 hours to charge.