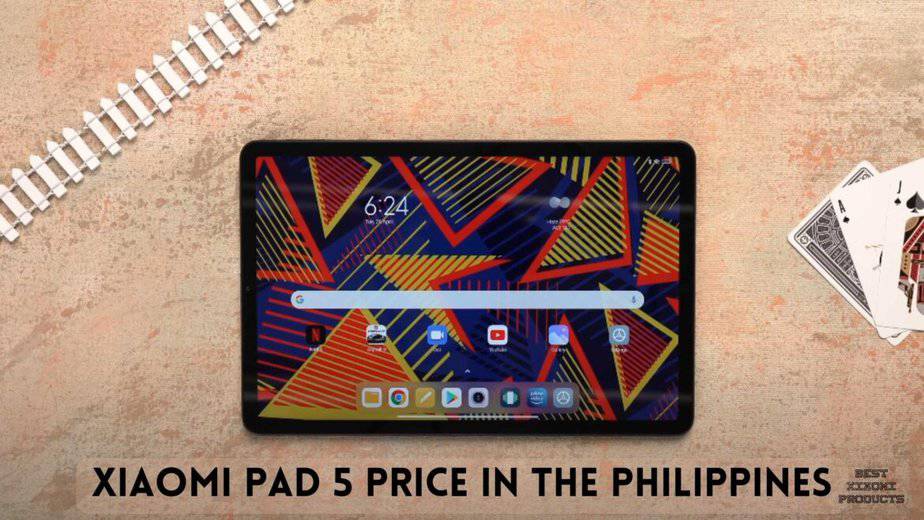 Tablets have been getting increasingly popular, especially in the Android space. The increase in popularity is because of the increase in quality too. Better designs, better features, and better performance are the reasons why the Android tablet industry is booming now.

Who said Android has no good tablets, the Xiaomi Pad is easily better than Apple’s regular iPad.

The device pricing hasn’t changed much but you can find the Tablet on sale for a little less every now and then. For the price, the Xiaomi Pad 5 offers some serious specs and excellent hardware. The Xiaomi Pad 5 costs less than the Apple iPad 9th Gen which makes it very attractive for most people.

Highlights of the Xiaomi Pad 5 Philippines

Powerful Performance – Snapdragon 860 is capable and faster than most smartphones/tablets in the category, only iPad 9th Gen beats it.

Large Battery – 8720 mAh cell lasts for multiple days on light use. 33W fast charging is a good addition as well.

Quad Speaker – Excellent quad-speaker technology is loud and clear, and consuming content on the Xiaomi Pad 5 is amazing.

Stylus Support – The Xiaomi Pad 5 has stylus support, which is useful for artists on a budget. The stylus is sold separately.

The Xiaomi Pad 5 is almost perfect on paper. You have everything you need in a tablet. Xiaomi has even implemented some tablet-specific features in the software. Overall, for the price, the Xiaomi Pad 5 is simply amazing.

Even though the back is made out of plastic, it doesn’t feel cheap. The matte finish gives it a smooth and premium feel making it nice to hold. The front has no protection, which is a bummer, you will have to use tempered glass for protection.

Overall, the design is simply amazing for the price. It’s slim, lightweight, and feels great. Build quality could have been better, as there’s no gorilla glass protection. However, for the price, I have no complaints about it. Even the colors look great. You can choose the Xiaomi Pad 5 in Cosmic Gray, Pearl White, and Green colored options.

The Xiaomi Pad 5 has a resolution of 2560 x 1600 pixels making it super sharp despite its large size. The display also supports Dolby Vision making it great for consuming content like TV shows and Movies. Dolby Vision and Dolby Atmos make the Xiaomi Pad 5 one of the best devices to watch stuff on.

Overall, even though the display is just LCD, it is bright, responsive, and vibrant. All of this makes the display Xiaomi Pad 5 better than its competitors like the iPad 9th generation. Even the bezels are minimal. You can get a better display for under 20,000 PHP on a tablet right now.

Snapdragon 860 combined with LPDDR4X RAM and UFS 3.1 Storage, you get snappy performance no matter what task you do. The Xiaomi Pad 5 is great for gaming, browsing, and for apps. You can open and switch between apps in an instant.

Xiaomi has tweaked MIUI for tablets and it offers cool split screen features and more that make using the Xiaomi Pad 5 even better. All this with a 120Hz screen and 240Hz touch sampling rate amazing for all tasks. You will have a great experience for entertainment, gaming, and productivity alike.

The Xiaomi Pad 5 is not the best performing tablet under 30000 PHP, but it’s super close to the iPad 9th Gen. While the iPad has better performance, it lacks 120 Hz and is a bit costlier too. I’m impressed with the performance of the Xiaomi Pad 5. With more software tweaks, it will shine even more.

The Xiaomi Pad 5 launched with Android 11 and MIUI 12.5 which is not exactly exciting but Xiaomi has promised future Android and MIUI updates. This means the tablet will be eligible for Android 12L which Google is creating specifically for tablets with built-in tablet-specific features.

Xiaomi has already baked in some tablet specific features that make multitasking better which in turn improves productivity. While Android tablets are not at the level of iPads, Google, Samsung, and Xiaomi are trying to change that.

From our tests, the Xiaomi Pad 5 lasted easily over 15 hours for video playback, while for gaming it was 8+ hours of mixed usage. This is definitely impressive and most people will be happy with its battery life.

The Xiaomi Pad 5 comes with 33W fast charging too, while it won’t charge the tablet in under an hour, it’s still much faster than most of the competition. The battery o. The Xiaomi Pad 5 is good but nothing amazing. You will be happy with it and have no complaints.

Xiaomi Pad 5 Philippines – Where to Buy

Check out Xiaomi Pad 5 Price in the Philippines.