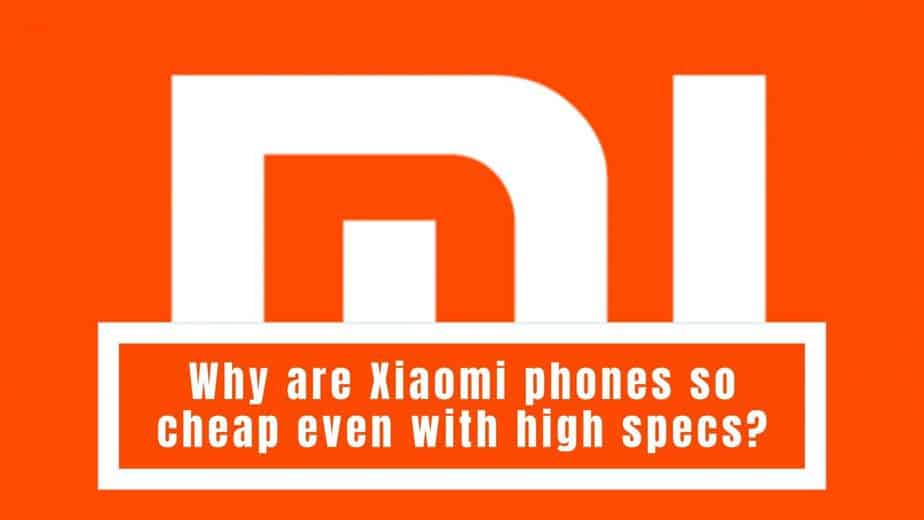 Did you know there were over 1.5 billion smartphones sold last year? That’s insane. Most importantly, it speaks volumes about the smartphone market. While everyone want’s one not all can afford an Apple or a Samsung, which is why Xiaomi is dominating the entry-level and mid-range segments. It has managed to do this and continued to dominate its competition primarily because they sell high spec phones at unbelievably low prices. Find out Why are Xiaomi phones so cheap even with high specs.

So, How has Xiaomi managed to sell smartphones with some of the best configurations at a margin of the price? It could be a wide range of reasons from partnerships to an iconic business model. Over the course of this article, we’re going to take you through the various reasons behind Xiaomi’s low price point for their high-end smartphones and how they’re conquering the market using this model of business.

Based on reviews and an understanding of the way Xiaomi has been functioning the last few years, Here are a few reasons as to Why are Xiaomi phones so cheap even with high specs.

After having reviewed various official documents from Xiaomi and having gone through our credible sources; my team and I found that:

Xiaomi phones are cheap even with high specs because the company has figured out a way to keep their costs low by limiting their quantities, staying online, using smart marketing strategies and even by hiring extremely few people. Most important Xiaomi sells multiple digital products through their phones to keep them profitable.

Why are Xiaomi phones so cheap even with high specs

Unlike the top three smartphone brands in the world, Xiaomi has made sure not to spend much on advertising. Having next to no physical stores with no retail staff to maintain, Xiaomi has managed to cut their expenses by relying on E-Commerce.

This principle works quite well and effectively. It focuses more on selling products through online platforms like Amazon rather than approaching the retailers and shopkeepers cutting out the retailers profit margins. Hence Xiaomi Smartphones are sold at affordable prices.

Xiaomi relies on social influencers for the marketing of their smartphones and is the only brand to have been successful at doing so. Xiaomi has been known to conduct influencer parties, conferences and even take feedback from customers rather seriously making their business model quite interesting.

Xiaomi realised that the social media network has a lot of potential when it comes to brand marketing and revenue generation. This is quite unlike other companies that increase the price of their smartphones just to compensate for advertisements.

Xiaomi works by releasing a limited number of smartphones at any given time. These batches of phones are sold via Flash sales that help them regain their margin and helps them in bringing down the per-unit cost.

The only drawback however is that by following the Flash sale policy, Xiaomi has not been able to cater to all their fans due to limited stocks.

Since Xiaomi smartphones are manufactured and assembled in China there are no incurring costs for any of the components required like, screens, chipsets and other parts needed for their smartphones. This results in their price in the global market being set relatively low

However, Xiaomi’s Chairman Lei Jun clarified a while back that the factors which determine their actual production cost of smartphones range from taxes, processing costs, production losses, R&D cost, patent fees, operating cost among others.

Have you noticed that though Xiaomi’s low price point, all their smartphones are powered by Qualcomm chipsets? This is thanks to the fact that Xiaomi and Qualcomm have partnered allowing Xiaomi to purchase Qualcomm chipsets in bulk for a fraction of the cost than other companies.

Having a decent tie-up with leading companies allows Xiaomi’s products to be manufactured, packaged and sold at a lower rate than other companies which rely solely on importing parts.

Xiaomi has shown the world that though they’re manufactured in China, the quality of each device is checked and delivered only upon passing the necessary inspection. This is the reason why Xiaomi has taken over under-developing and developing countries easily.

Having a good build for a cheap smartphone helps make it last on the long run and reduces the overall after sales expenses Xiaomi may have to incur if the device is within it’s warranty.

Yes, Xiaomi is in fact a Multi-Million Dollar brand that does not focus primarily on smartphones. They manufacture different products and have multiple sources of revenue.

Rather than reaching a small customer base, Xiaomi has been able to spread its boundaries to other countries and regions of the world. This has enabled them to maintain a good impression in several countries for their products and service.

Xiaomi’s primary target of customers is in the market of South Asia where millions of individuals fall in the middle class category making it difficult for one to own a high-end Samsung or Apple smartphone.

However, the main reason Xiaomi has taken over this segment in the market is due to their low priced smartphones that are something not every company can pull off.

Many companies hire human capital to help promote their products in the local markets. However, Xiaomi does not follow this model and believes that it would be an unnecessary investment.

Xiaomi is one of the few companies that manufactures phones in limited quantities. They only start manufacturing the second round of phones ones the first batch is done. This helps them save a ton of money as there’s no extra casting.

Another way Xiaomi stays profitable is by staying completely online. They save a lot of money by staying online. All of their phones are usually sold by Xiaomi authorized sellers. So, they don’t even have to spend a lot on warehousing costs.

Interestingly, Xiaomi is known to be a lean company. There tend not to hire a lot of people as this helps them make faster decisions. This is why they overtook Huawei in less than a decade. Huawei is massive and takes a lot of time to not only respond to the market but also implement technology and ideas.

A company with a start-up mindset like Xiaomi is killing it because they can allocate money that could be spent on hiring new employees on other growth decisions.

Take India for example, Xiaomi has hardly 100-150 employees in India to handle the world’s largest market. This allows Xiaomi to save on their expenses by handling most of their sales and promotions online rather than in stores or through third party retailers.

Xiaomi has built their reputation as one company that does not use obsolete and outdated tech. As we’re living in a world with rapid and constant changes in the field of technology, it is the new technology that turns heads and grabs anyones attention.

From the processors to the displays and structure of the smartphones, Xiaomi has been able to bring in updated models of their smartphones at every launch. This makes it one company that guarantees a new technology is powering their smartphone everytime.

No Warranty void on Rooting

A positive point to note about Xiaomi smartphones is that rooting the device does not void your warranty. This is not the case with all brands. Xiaomi has given the user full access to upload modified Roms on their devices and the user would still be able to claim warranty on the device if it happens to crash. Check out our guide on Why are Xiaomi phones so cheap even with high specs for more details.

This is beneficial for developers and other individuals who wish to change either the operating system on the smartphone or simply add third-party apps from outside the Play Store.

Xiaomi’s business model is quite unique, they are not in the business of only selling phones. To be more accurate their plan is not to selling the handset itself. Their long term plan is to sell digital products through their phones. In fact, the precursor to this is the innumerable ads you get on the phone. These advertisements are huge portion of Xiaomi’s traffic.

From what we have gathered, we can conclude that Xiaomi smartphones are affordable and come with great specifications. The devices are overall great with a good sturdy build.It’s clear that Xiaomi has thought their marketing strategy through and have been able to pull off something most companies can’t.

A plus point is that Xiaomi does not operate only in the smartphone market and has dominated in home security, laptops and other consumer electronics. With its strategy, Xiaomi remains the most affordable Chinese smartphone manufacturing company in the world. check out our entire guide on Why are Xiaomi phones so cheap even with high specs.

Why are Xiaomi phones so cheap?

Xiaomi Phones are known for their high specs and insanely cheap prices. The are budget-friendly nature of these phones help not only disrupt the market but also dominate it. For example, Xiaomi sells most of it’s phones in India and it has managed to dominate the entry level. No other brand comes even close. They manage to keep it cheap and yet stay profitable due to various reasons like cost cutting when it comes to advertisments and eliminating unecessary investments. Check out our guide on Why are Xiaomi phones so cheap even with high specs for more details.

The 7 Best Xiaomi Phone For Vlogging in 2022