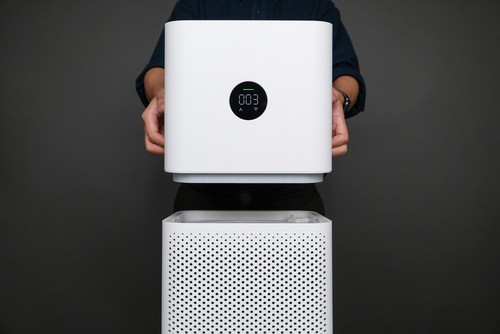 Breathing clean and pure air is the need of the hour. And if you get to live in and around a metropolitan city, it makes the situation much much worse. An air purifier is necessary for such conditions to lead a healthier life.

Philips has been making air purifiers for quite some time now, and Xiaomi is a company that wants to get a hold of the air purifier market. Xiaomi aims to do this by offering excellent value for money, while Philips will use their brand power along with its reliable build quality.

So in this article, I am comparing air purifiers from Xiaomi and Philips. When it comes to features and functionality both air purifiers look impressive and promising on paper. But do they keep up with their promises in real-world performance?

Build and design is really important when it comes to air purifiers. They should be rigid to handle any kind of situation thrown at them. As air purifiers are always exposed to unfortunate circumstances, build quality plays a major role.

It is also very important for an air purifier to be compact and portable to move around the house with ease. Talking of compact build and portability, both Xiaomi and Phillips have a clear idea of what they are really into and have executed it well.

As per build and design, both manufacturers have designs that stand out from the crowd. Let’s take Xiaomi for instance, their design is boxier. It has only a few curves and a lot of right-angled edges. Xiaomi’s design hasn’t changed much from their first-generation air purifier to their latest air purifier 3H.

When it comes to aesthetics, the Xiaomi air purifier 3H comes only in one color and that’s white. It’s got a mesh-type grid on all four sides for 360° air intake. There is also a small round-shaped digital display for air quality indication in the front. It’s a cuboidal-shaped device with an air intake fan on the top.

On the other hand, Philips air purifier designs change significantly from one model to the other. For example, let us take Philips’s AC2887 air purifier. its design is much wider from the front with a slimmer side profile compared to Xiaomi air purifier 3H’s boxy shape. Though Philips models aren’t as compact as Xiaomi’s, Philips gives consumers the option to pick from many different designs.

Like the Xiaomi Air purifier 3H, Philips’s AC2887 also comes in a single color, and that’s white. On the design front, it’s more of an oval-shaped device, with a ROG for air quality indication on the front. It also comes with a small round-shaped digital cluster for multi-function.

Function and How to Use

Let’s talk about functionality because the user-friendliness of a device matters a lot. It doesn’t matter if a device is loaded with features if you can’t use it easily. But luckily, both Xiaomi and Philips are very user-friendly when it comes to their air purifiers. Both devices also come with a power cord for the power source. I am comparing the functionality between the Xiaomi Air Purifier 3H and the Philips AC2887 Air Purifier.

To begin with the functionality of Xiaomi, the designers have designed it with a minimalist approach. Xiaomi air purifiers come with just a single touch-sensitive button integrated with the display. But you can use this button for multiple functionalities by pressing it multiple times. But at times it can get a bit annoying clicking on it multiple times.

Long pressing the button turns the device on and off. While pressing once to switch between the multiple operation modes like sleep mode, turbo mode, and display on and off. There is also an RGB light indication to show real PM2.5 concentration in the surroundings.

The purifier comes with a small round display in the front. It also indicates temperature, humidity, wifi strength, and working mode. I loved the way it shows real-time filter life remaining in percentage.

When we consider the functionality of Philips, it does a great job of holding its own against Xiaomi. But unlike Xiaomi, Philips has gone with multiple buttons having their functions except for the mode button. This makes it better than Xiaomi in my opinion giving better control and is much more user-friendly.

Talking about filter life, both Xiaomi and Phillips come with a removable filter. Replacing the filter in both devices is very simple. By removing a small removable panel from the rear side of the air purifiers, you can get access to the filters. You can pop the filters out and replace them easily.

Purification is where these devices have to shine the most and spoiler alert, most devices are great yet some differences could influence your choice. It fills me with knowing how smart and efficient these devices are.

Both Philips and Xiaomi have their perks, they outshine each other in different sectors. The performance of a device varies differently depending on the variant. I have chosen the mid-range for our comparison.

When it comes to the purification area, the Xiaomi air purifier 3H wins here with a purification area of 484sq.ft. In comparison, the Philips AC2887 is just behind its rival with a range of 420 sq. ft.

Xiaomi 3H uses an H11 HEPA (High-Efficiency Particulate Absorber/Air) filter with 3 layer filtration system. Which promises a filtration efficiency of 99.97% for particle size up to 0.3 microns. It also has a high-performance CADR (clean air delivery rate) of 380 m3/hour. . As per what I have experienced I can say that it delivers on these claims.

Similarly, Philips AC2887 does come with the same set of features as mentioned for Xiaomi 3H. But here Philips takes a step above Xiaomi 3H by providing a bacteria and allergen mode. The Philips AC2887 also has an edge over the Xiaomi 3H by offering a better H13 HEPA filter, which is capable of purifying particles as small as 0.2 microns.

In the end, air purifiers just got one job to do which is to purify the air. So when an H13 HEPA filter does it better than an H11 HEPA filter, I would pick it as long as the cost is the same.

It isn’t such a deal-breaker for Xiaomi but Philips is better when it comes to purification.No device is perfect as Xiaomi 3H has its advantages over Philips AC2887, which I will be discussing in the features section.

Both Xiaomi and Phillips have loaded their air purifiers with all the features that you will need from them. I would say they both have gone a step further by offering advanced features which could impress you. Eventually, it all depends on individual preferences and choosing the set of features you need the most.

Xiaomi has never failed to impress us with its smart features, from across all its device segments. They have delivered some of the best features on their air purifiers too. They have taken the air purifier industry to another league by giving smart app connectivity.

The Xiaomi 3H offers smart features such as scheduling, connection to Wi-Fi, remote control over Wi-Fi, monitoring air quality, and works with a voice assistant as well. It also gets a laser particle sensor to automatically sense the air quality and pollutants in the air to turn on and off accordingly. It comes with sleep mode too, for a quieter operation of the air purifier.

On the other hand, Philips AC2887 isn’t the most feature-rich one. But I would say they have ticked most of the primary feature boxes such as auto sensors. But the problem here is unlike Xiaomi it doesn’t come with smart app connectivity or a laser particle sensor. Instead, it comes with an IR sensor which isn’t that effective from my experience.

So overall when it comes to features the Xiaomi Air Purifier 3H trounces the Philips AC2887.

Mi has more airflow than Philips; it is rated at 310 m3/h as opposed to 270 m3/h. Aside from that, the Mi Air Purifier’s design does appear to improve air circulation in the space. Even now, after turning on the Mi Air Purifier, my room feels cooler and air can be felt flowing throughout the room, whereas this isn’t the case with Philips. This can be a problem in the winter.

This is where Philips really excels, theoretically speaking. You should get longer-lasting filters if you use a washable pre-filter and separate carbon and HEPA filters. I’ve had the Philips air purifier for six months, but it’s only now that I believe the filtration has degraded that I feel the need to order a HEPA replacement filter.

Contrarily, Mi has an integrated air filter, so you can either let the pre-filter become clogged or clean it with a vacuum, which could reduce the HEPA filter’s effectiveness.

Additionally, the Mi Air Purifier has been operating for just over 19 hours and has already used 2% of the filter life; according to its app, the filter life has only 142 days (less than 5 months) left. despite the fact that the filter has a 145-day expected lifespan.

However, during the evening and night, the PM2.5 level in our home exceeded 600 (the nearest pollution center reported 999 outdoors, and it can’t register pollution beyond that), and even after running all night with doors and windows closed (with one window open), the PM2.5 level remained around 300.

Since these are extraordinary times, a conclusion can only be drawn after using the product for a few months.

Online retailers Amazon and Flipkart sell filters for Philips and Mi devices. Since Philips’ filters may also be used offline, it has an advantage over Mi in terms of availability. Although both types of filters frequently run out of stock online, it is a good idea to get one as soon as either gives you a warning that the filter is likely to run out of life.

Mi should use less electricity overall, albeit not significantly less. The fact that it produces clean air while using less energy is a noteworthy achievement that ought to be commended.

I am currently satisfied with both of my purchases, and I am hopeful that they will help reduce the negative effects of pollution on my health and the health of my loved ones. Only time will tell which air purifier proves to be superior to the other, and when I do, I’ll write a thorough comparison.

However, I must admit that the Mi app’s PM2.5 level is far more unsettling to look at than just the red Philips sign. And you’ll probably find yourself checking it repeatedly!

In my opinion, both the Xiaomi 3H and the Philips AC2887 have stood up to their promises. At the end of the day, it’s all up to you. You get what you pay for, it’s as simple as that. When you are clear about your priorities, you can choose the best one for you.

Comparison of Different Types of Xiaomi Air Purifiers | The Best for your...