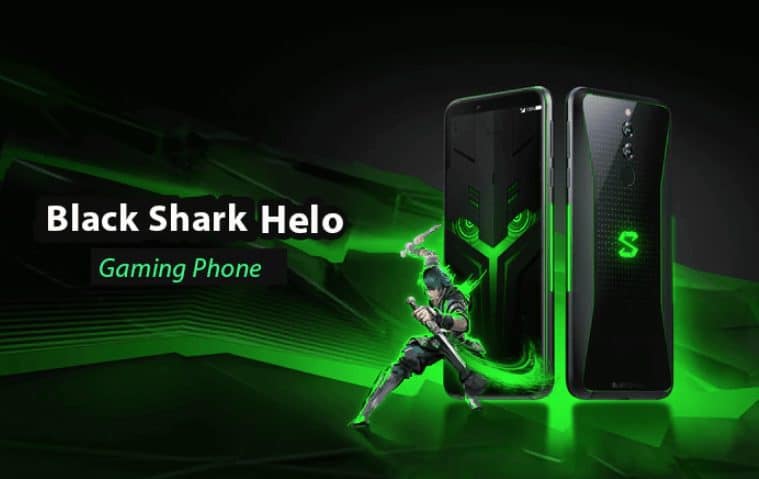 Manufacturers and brands in every segment have to worry, as Xiaomi is knocking on every door. From smart lamps to toothbrushes. In this article, we are going to cover an exclusive Xiaomi product, the Black Shark 2 Helo.

It’s a gaming smartphone, but this is no ordinary smartphone. Let’s find out more!

Out of the Box

The packaging for the Blackshark 2 Helo is something awesome. It’s completely black in colour, unlike other Xiaomi packaging that is predominantly in white. Inside the box, you are welcomed with the “You’re a gamer” welcome card.

Then comes the phone. It has a black finish with perforations in the back. Apart from that there’s a sim ejector, a 3.5mm USB converter, USB type C cable, power brick for fast charging, joypad, a special phone case that lets you attach the joypad on top and a screen protector.

This is quite a lot of times within the box.

The phone itself has a premium look to it. It’s a combination of metal and glass. The black metal finishes in the back gleam against the light with a greenish tinge which adds to the allure of the phone and its a small but cool design feature that gamers will love.

The front of the device is a 6.0-inch AMOLED HD+ display, the version one of the Blackshark had an LCD display. So this clearly is an upgrade and a much-needed one.

One letdown for gamers is the lack of an infinity display. It has bezels on the top and the bottom. Considering bezel-less phones are the norm, it wouldn’t have been too much to expect Xiaomi to ship a bezel-less phone. But, unfortunately, that is not the case.

Considering gaming needs a well-rounded sound experience, Xiaomi has added two speakers, one that lines the top of the display, and the other that lines just below the display.

The bottom of the phone has the USB type C port and hence the USB Type C cable.

On the left side and the right side of the phone, there are thin strip light panels that glow and shine in RGB colours. This is an incredibly cool feature that you can control and set it up differently for various colour notifications. They add to the coolness factor of the phone.

On the left side of the phone, there is also a sliding button called the “Shark key”. The shark key, if slid up, activates the shark mode.

The shark mode, in a nutshell, closes every application on the phone and dedicates all resources, power, efforts and battery to gaming. This is basically an all hands on deck situation, that focuses the phone towards gaming.

Coming to the specifications, it comes with a Snapdragon 845 Processor built in and has 6GB of RAM that can be expanded up to 10GB of RAM. If you think you read that wrong, read again. It is 10 gigs of RAM on a single phone. That is a combination of 5 different phones.

It also has two liquid cooling partitions that keep the device cool while intense gaming. The battery that powers all of this is a 4000 mAh, which is pretty sizeable, but necessary for a phone of this calibre.

There is a front-facing camera that is a 20-megapixel setup with an f/1.75 aperture, which is actually pretty solid for a selfie-camera. For a gaming based phone, you wouldn’t expect a camera that is so good and Xiaomi has delivered.

Before we get to the back cameras, let’s talk about the ‘S’ logo, which represents the ‘Sharks’. The logo glows in green and the colours can be changed. The colour options are, violet, blue, sky blue, green, red etc.

There is also a fingerprint scanner at the back, which is perfectly positioned to unlock your screen. Among all the set-ups we’ve seen, the back fingerprint scanner set-up is by far the easiest to use as your fingers are already wrapped around the phone.

Coming to the primary cameras, there are two of them. The first camera is 20 megapixels(f/1.75 aperture) and the secondary camera is 12 megapixels.

Should you be buying Xiaomi Blackshark 2 Helo?

The Xiaomi Blackshark 2 Helo is a powerhouse of a gaming device that has some insane hardware set-ups like the twin cooling partitions and also software set-ups such as the ‘Shark Mode’ that enables gaming. A lot of phones in the market is advertised as a gaming phone, but this walks the talk in terms of hardware and software.

The 10GB of RAM might seem like overkill, but it also ensures that you can play any game in the world seamlessly and without lag. Battery power is always a concern during gaming and that is why Xiaomi provides a 4000 mAh battery that retains the charge for quite a long time and they also provide the hardware that enables fast charging.

To sum up, the Xiaomi Blackshark 2 Helo is an amazing gaming device that is built for an immersive gaming experience. The phone’s affordability also plays a big role in its popularity.

The 7 Best Xiaomi Phone For Vlogging in 2022