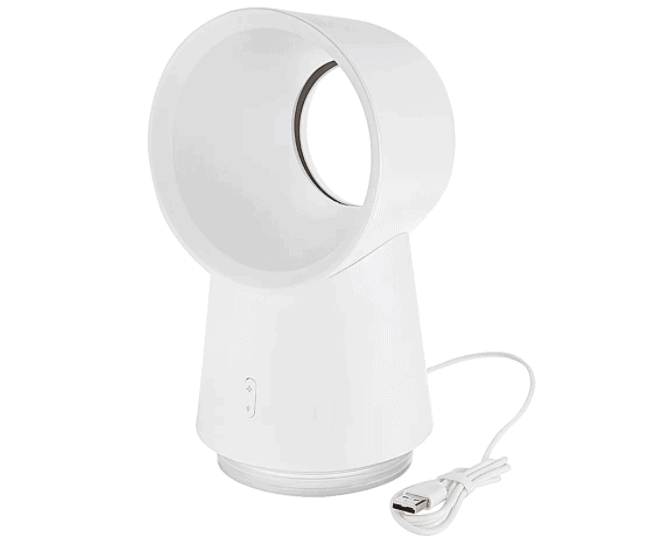 With summer closing in on us the ceiling fans just won’t cut it. It circulates air in a wide area without being effective. Although AC’s do a great job they are ridiculously expensive. Xiaomi has developed the perfect solution to this problem: A Portable Bladeless Fan. Check out our Xiaomi Bladeless Fan Review for all the details.

As the name implies, Bladeless Fans don’t depend on huge metallic blades to generate air. These appliances use an interesting technology to produce air from a hollow dome/ring-like structure. The Xiaomi Bladeless Fan goes a step further. Not only does it have a fan feature it also works as a humidifier and desk lamp. In fact, it does a pretty great job as a humidifier.

However, is it worth it? Let’s get to the review and find out. Here’s our Xiaomi Bladeless Fan Review.

The Xiaomi Bladeless fan is above average in function, decent in performance and design. While the user may not benefit significantly from the fan function, the humidifier feature and lamp feature make up for its lack of power. Most importantly, it is extremely affordable at only $33.

Xiaomi Bladeless Fan – Inside The Box

This Bladeless fan from Xiaomi is quite the device. It has a 3 in 1 function. It basically, works as a fan, an LED light and a humidifier. We’ll get into the details in just a bit but first, let’s get to the design. This fan happens to be quite compact in size with dimensions of 129 x 145 x 227 mm. It also is extremely lightweight so it can easily sit on a desk or your bedside table.

Also at the back is the mist generating device. This Ultrasonic device is a grey projection that basically attached to a base with contact pins. This base is connected to the base of the Xiaomi Bladeless Fan. The extended base is hollow and this is where you inject the water and the essential oil. This mist generating device is specially designed and consists of a hole in the middle to emit the mist and wick to soak up the water.

As mentioned earlier this Xiaomi Bladeless Fan is a 3 in 1 device. So it functions as a desk lamp, a humidifier and a fan. It does a decent job with regards to all these function but lets go into each and understand the science behind it.

Next up is the usage. Although the functions are varied the usage is extremely simple.

To start off make sure its connect to a portable charger or any power outlet. It needs to have power flowing through it all the time so make sure it’s constant connected.

Before filling in the water make sure you turn off the humidifier and place it on a stable surface.

When it comes to the performance this bladeless fan has it’s ups and downs. After having used it for half a year, I’ve found the fan feature to be completely useless. As mentioned earlier, the fastest setting is barely alright and yet it still not as effective as a regular fan. The most unfortunate bit is that while this fan is highly directional and is equipped with a dome that improves the accuracy of the airflow. However, the power is completely disappointing.

As a humidifier, it’s not bad. It’s relatively easy to inject water and essential oils without causing a mess. The fan gives direction to the humidifier. And the emission is potent enough to easily unclog nasal passages. It’s especially useful if you’re feeling stuffy while working. The only issue is that the emission only lasts for a maximum of 45 minutes. So, it can get annoying when you have to refill it multiple times throughout the day.

I’ve primarily benefited from the lamp aspect of this device. The brightness settings have a terrific range and is easy on the eyes.

While it does have a crappy fan function it does work as a decent humidifier. The humidifier function works well especially since it works in tandem with the fan so the mist is projected towards you. It also has a LED function which projects warm light that is great for a desk or a bedside lamp.

Is the Xiaomi Bladeless Fan worth it?

Yes, the Xiaomi Bladeless fan is worth it. However, it’s only a smart investment if your in the market for a good humidifier. The fan function is quite dismal. The speed of the fan isn’t effective even on the highest setting. You can definitely find better portable bladeless fans out there for the same price that is way better.

The Humidifier function is highly effective especially when paired with the fan. The desk lamp feature, on the other hand, is like an add on. All in all, it’s worth it if you already have a portable fan. Check out Xiaomi Bladeless Fan Review for more details.

Jenny is one of the main author/reviewers for bestxiaomiproducts.com. She loves all things Xiaomi and loves testing all their products.

Xiaomi vs Tecno : Which is Better?