Home Smartphones Xiaomi Mi 11 vs OnePlus 9 Pro | Which is the Best Flagship?
Smartphones 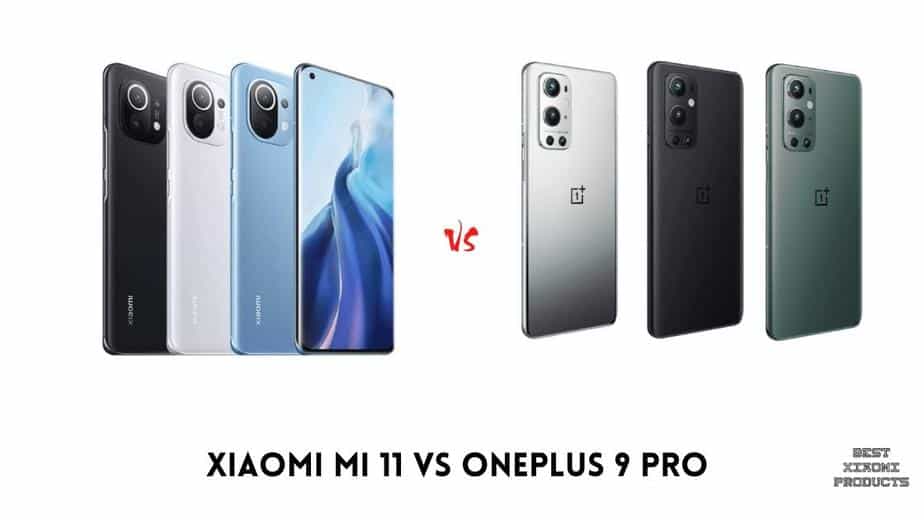 Looking for a new smartphone? Check out our Xiaomi Mi 11 vs OnePlus 9 Pro comparison to make the best choice.

In recent years, the cell phone’s function has moved from that of a voice communication device to that of a multimedia device, and it is now often referred to as a “mobile device” rather than a phone. We now spend more time on our phones perusing the web, checking email, shooting photographs, and maintaining our social media status than we do on making phone calls.

Cameras and video cameras are also being replaced by smartphones nowadays. When cameras initially appeared on phones, the photographs were of poor quality, and the function was dismissed as an afterthought. Consumer expectations for cellphones have altered dramatically in recent years. Virtual toolboxes have been created for practically every purpose thanks to the app store.

Nowadays, people are being introduced to so many smartphones with unique features, and Xiaomi Mi 11 and Oneplus 9 pro is one of them. Xiaomi is the third-largest manufacturer of mobile phones in the world, behind Apple and Samsung. It offers a wide choice of high-quality yet inexpensive phones and is often unrivaled in terms of value for money.

Oneplus is also known for its key qualities that made them so distinctive in its ability to deliver high-end specifications at a significantly cheaper price than most of the other smartphones available on the market.

Read on to find out if you should choose a Xiaomi Mi 11 or a Oneplus 9 pro!

The new Mi 11’s target audience has been made clear by Xiaomi. This phone is marketed as a “movie lover’s phone” by Xiaomi on its website. The Xiaomi Mi 11 is all about the cinematic experience, whether you’re watching movies on the gorgeous display or creating your own films with the pixel-rich camera. However, this phone is much more than just a phone.

If you’re looking for the greatest display, software, and pricing, go no further than OnePlus’s new OnePlus 9 Pro smartphone.

The OnePlus phone now competes with the likes of Samsung’s Galaxy S21 and Apple’s iPhone 13 thanks to an increase in cost. Because of this, OnePlus has made no secret of its intention to compete with the mentioned industry leaders with the OnePlus 9 Pro. For the firm, the “cheap flagship” space is no longer an option. Instead, it wants to compete with the big players.

One of the most anticipated devices of the year has finally arrived. Aside from the occasional “T” model, OnePlus has maintained a fairly regular release schedule in recent years. The numbered series debuts in the spring, followed by an autumn “T.” A more inexpensive model, like this year’s OnePlus 9, is usually offered alongside a more premium “Pro” model.

There was only the lackluster OnePlus 8T last autumn, and now OnePlus 8T Pro. The business hasn’t produced a premium phone in over a year. The OnePlus 9T Pro was not released this year, and the company has no plans to introduce a new flagship model until 2022. When it comes to high-end OnePlus phones, this model is your only option at this time.

“Fluid Display 2.0” of the 9 Pro is loaded with tech. It uses LTPO AMOLED illumination for its front panel. Due to the reduced temperatures, this allows for better performance. To prevent inadvertent touches, the screen is micro-curved and has a peak brightness of 1,300 nits.

It is powered by an 8GB RAM Qualcomm Snapdragon 888 CPU with MIUI on top of Android 11. An under-display fingerprint reader, 5G connection (with NFC and infrared), Hi-Res audio, and 256GB of internal storage are all included.

The gadget is powered by a 4,600mAh battery and can be charged at a 55W wired rate or a 50W wireless rate using the device’s rapid charging capabilities. The phone’s battery is substantial enough to last a whole day without a problem. Increased brightness and frame rates will cause a reduction in battery life. The phone barely made it through a single day with both of those features pushed to the limit.

OnePlus says the 9 Pro has great battery life, but some consumers disagree. The business used the same battery configuration as the OnePlus 8T, thus there are two 2,250mAh cells totaling 4,500mAh. This is an excellent battery size for this phone. The phone comes in dynamic 120Hz mode with Full HD+ resolution, which is the reason why the Oneplus 9 Pro can barely get through a day. If you reduce the frame rate to 60Hz, the phone suddenly lasts a day and a half. That’s fantastic news for battery longevity. In other words, the phone can last longer than a day, but you must modify it.

The basic setup barely takes the phone through the day. Just messaging, social networking, surfing, and maybe some shooting. Phone gaming puts a lot of stress on the battery. The phone drops 5 percent in a few seconds, and if you game for 30 minutes or longer, it won’t make it to supper. That’s bad. Also, if you use the always-on display, expect a battery drain.

The phone is made of a combination of metal and glass. The metal frame is snugly held in place by contoured glass slabs. In particular, the glass towards the side edges tapers, making it more pleasant to hold or put in a pocket. Along the side rails, the metal frame is thin and creates end caps. The quality of the materials, the fit, and the overall appearance are all excellent.

Xiaomi claims that the phone is water-resistant, although it cannot be submerged. That’s a critical function omitted from a premium smartphone. In order to withstand being submerged, several of the rival devices have been given the IP68 designation.

Frost White, Midnight Gray, and Horizon Blue are available as color options for this particular model.

It’s OnePlus’ way of saying that the 9 Pro’s design is “burdenless,” which is a reference to how it appears. A slender metal frame is sandwiched between two 3D curved Gorilla Glass 5 panels. There are no sharp corners, and the metal and glass are properly matched at the joints. The result is a remarkably soft and gentle hand feel.

Xiaomi certainly spent a lot of money on the camera. The phone’s marketing focuses on its capacity to allow people to produce videos like pros. This phone has a lot of hardware and software. It features three lenses on the back: normal, wide-angle, and tele-macro. The 108MP main camera and the 20MP selfie camera are each quadrupled, yielding 27MP and 5MP “Super Pixel” photographs. In 8K, video speeds range from 240fps for slow-motion to 24fps for cinematic footage. The phone’s optics and megapixels allow it to zoom from 0.6x to 30x. Overall, the Xiaomi Mi 11 camera is excellent, but it falls short of Apple, Google, and Samsung.

The main sensor is an IMX789. The on-chip lens, 12-bit RAW, and DOL-HDR capture clear photos. Photos are halved to 12MP, but you may choose the full 48MP image if you like. Other features of its camera is its ultra-wide lens. This 50MP camera uses a freeform lens with a “series of unique curves” to smooth out incoming light.

The Mi 11 is a standout smartphone from Xiaomi. It’s a great value for the money. It has the appropriate pricing and the correct specifications to compete with the current crop of flagships on the market. There are only a few factors keeping it from reaching its full potential.

The quality of the design and the production are excellent. It’s a beautiful phone that looks and performs equally well. The stunning display, amazing audio, and incredible processing power of the Snapdragon 888 are just some of the standout features. The Xiaomi MI 11 is a powerful beast that’s perfect for watching movies or playing video games all day long. The phone’s battery life is decent, but it takes a blow when you push it to its limits.

While OnePlus has never been so close to perfection. It combines a number of specifications and features into a coherent whole. OnePlus tweaked tiny and significant things to make the 9 Pro a phone that threatens industry leaders. Nearly.

The OnePlus 9 Pro has a great design, a great display, great performance, and great software. You have a winner with some of the quickest charging available. Most importantly, the OnePlus has improved the camera to a competitive level. It’s not the greatest, but it closes the gap with the competition.

Both Xiaomi Mi 11 and Oneplus 9 Pro are great but there are some situations when one is better than the other. First, their designs are almost the same. Both phones are excellent in favor of simplicity. The OnePlus 9 Pro and Mi 11 are both sleek devices that avoid excessive flourishes in favor of a balanced good appearance. Second, the battery life of the two is slightly the same but when it comes to the most long-lasting battery life it’s the Xiaomi Mi 11. Third, the camera of the Oneplus 9 Pro is a lot better than Xiaomi Mi 11. Lastly, software.

They both run Android 11. There is no comparison between OnePlus’ OxygenOS 11.2 and Xiaomi’s MIUI 12. While MIUI 12 is fine, OxygenOS 11.2 is more refined, user-friendly, and beneficial every day. The OnePlus 9 Pro is better in many ways. It’s more pricey than the Xiaomi Mi 11, but it’s worth it.

Is OnePlus better than MI?

Not really, both brands are good at what they do. Though OnePlus is turning into Oppo which is a bad sign. I would choose Xiaomi over OnePlus as Xiaomi offers better value. OnePlus used to be the Android software king, and it isn’t anymore, so there are not many reasons to go with OnePlus.

Yes, the Mi 11 is still an excellent smartphone. In fact, I like it more than the new Xiaomi 12. I would definitely buy the Mi 11 if it is available for a good price, which is lower than Xiaomi 12.

Is the Xiaomi camera better than OnePlus?

No, Xiaomi’s cameras are not better than OnePlus. Xiaomi’s camera department is the only thing I don’t trust to be world-class. Apple, Samsung, and Google all have much better camera systems on their smartphones. Even OnePlus is overall better at photography than Xiaomi.

Which is the best Xiaomi phone?

The best Xiaomi phone is the Xiaomi Mi 11 Ultra. This phone has everything you’ll ever need and want. Superfast performance, beautiful screen, amazing camera, and impressive battery technology. And the best part is it costs less than Apple 13 Pro Max and Samsung S22 Ultra.