Xiaomi Roidmi vs Dyson | Comprehensive Comparison between F8 and V8 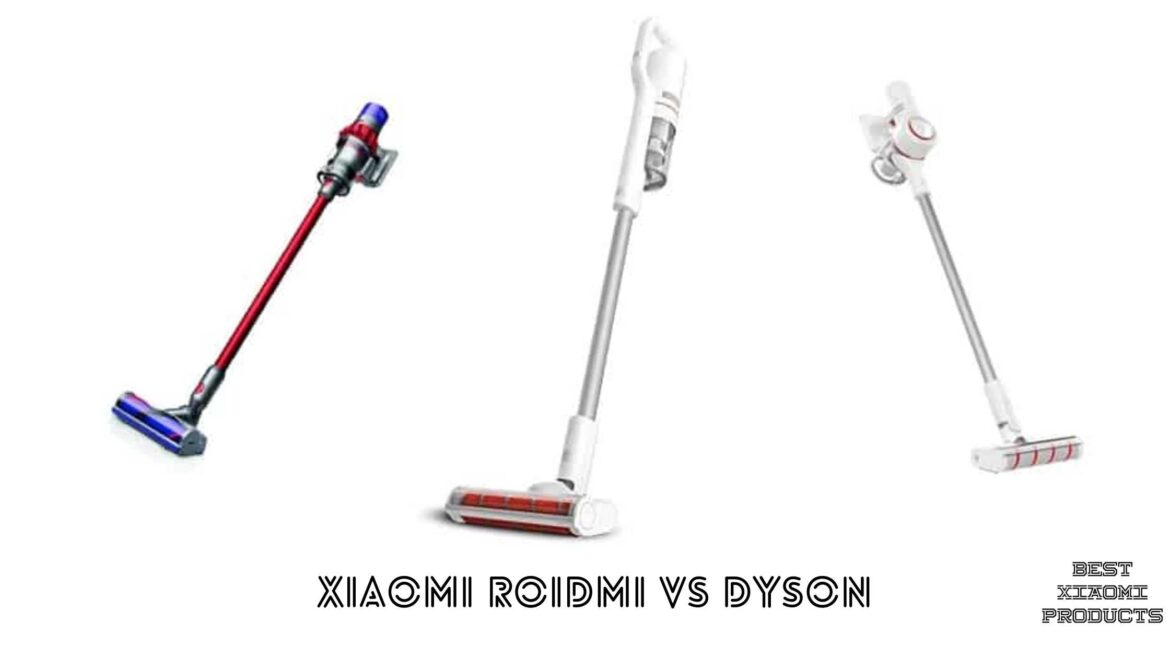 Check out our guide on Xiaomi Roidmi vs Dyson for all the details.

While Dyson is famous for its hardware, Xiaomi is famous for its smart features. Over the years Xiaomi has inched its way to Dyson’s standards of build quality and now they’ve seemed to have gone beyond with the Roidmi series of vacuums.

Roidmi was launched in 2015 and is Xiaomi’s sub-brand that specializes in manufacturing only cordless vacuum cleaners. These are some of the best products in the market. These vacuum cleaners have managed to catch up to Dysons 20 years of legacy in just five primarily due to their designs and patented technology. Check out our guide on Xiaomi Roidmi vs Dyson for all the details.

After reviewing and comparing all Roidmi and Dyson Vacuum cleaners based on various factors like design, function, performance, and the price we zeroed in on the best vacuum cleaners of both companies and compared them. We put both the vacuums through a series of stress tests to determine the winner. We found that:

The Roidmi F8 trumped the Dyson V8. And it was a landslide win. The Roidmi dominated Dyson not only in price but also in battery life and weight. While Dyson did have more suction power it ran out of battery much faster than the Xiaomi. So, with Xiaomi Roidmi vs Dyson, Xiaomi is the clear winner.

Although there a various Roidmi and Dyson vacuum cleaner models. We chose the best of the best from each company and pit them against each other. We chose the Roidmi F8 From Xiaomi and the Dyson V8 From Dyson. These two models were chosen based on sales, price, and popularity among other factors. Most importantly, these two are part of the same generation and price segment.

To determine a clear-cut winner we decided to compare these two vacuums with regard to their design, power, Performance, Battery life, and price.

First up is the design. When we come to the design, there is a major difference between the two devices. While Xiaomi has stuck to its minimalistic white design from Apple’s playbook, Dyson always has opted for its jarringly bright color scheme of blue and orange.

Now, while the choice is subjective. Xiaomi still has an upper hand due to its elegance. For example, the sleek white design in addition to the gorgeous curves is not only futuristic but also appealing to the eyes. It won’t look out of place even when placed in the living room. However, the Dyson V8 can’t compare, I’m afraid. The Blue and Orange stick looks like its pest exterminator’s tool.

But then again it’s not enough to determine a winner. This is why we took to build and weight into consideration. After all, being able to maneuver with ease is extremely important. When it comes to both build and weight Xiaomi was the winner, It was much lighter than the Dyson at just 3.3lbs as opposed to Dyson’s 5.5lbs and much more ergonomic.

When it comes to cleaning performance, both vacuum cleaners are closely matched. From my experience, both the Xiaomi Roidmi F8 and Dyson V8 Absolute performed well on hard surfaces like tiles and floors, while the Dyson was slightly better for carpet cleaning.

The Dyson also is better at picking up minute particles compared to Roidmi but the difference is small. Overall, the Dyson V8 Absolute offers better cleaning performance, but it is not enough to justify the cost premium.

The suction power is one of the most important parameters when comparing vacuums. Not only does it showcase the extent of the vacuum cleaner’s capabilities, but it also gives you a clear picture of the effectiveness of the machine. While both the Roidmi F8 and the Dyson V8 produce the same amount of air watt of 115, there are some major differences in the suction force produced by both on the highest settings.

When it comes to power Dyson V8 is the winner. As opposed to Xiaomi’s minimal 37 Cfm output, Dyson produces a staggering 10% more 41 Cfm. This extra suction power is actually powerful enough to separate mites from a carpet. And that’s an important difference.

The filters of a vacuum are extremely important. Not only does it help segregate the debris based on size, but a good filter can also even filter out allergens and harmful microbes. A vacuum cleaner with a good filter can obliterate the dust in an entire household and make it safe for those with respiratory illnesses.

When it comes to filters both Xiaomi and Dyson have the highest grade HEPA filter, in addition to sealed vacuum technology. Because these types of filters should be replaced quite often. Xiaomi is the clear winner since it starts off at such a cheap price.

Capacity refers to the amount of debris the Vacuum can store in its bin. This obviously is an important factor as a vacuum cleaner with a higher storage capacity will reduce the number of trips to the trash can. Between the F8 and V8, V8 is the clear winner. The Dyson has a 0.5 Liter capacity as opposed to Xiaomi’s 0.4 liters.

Battery life is extremely important when undertaking a massive cleaning session. You really don’t want to recharge your vacuum cleaner multiple times. Especially since it takes quite a long time to charge to 100%. So, when it comes to battery Xiaomi is the all-around winner. Not only does it last more than the Dyson but it also achieves a full 100% charge much faster than its competition.

Specifically, the Xiaomi F8 can run for about 50 minutes as opposed to Dyson’s 40 Minutes. Those ten minutes are unfortunately nothing to scoff at when cleaning your home.

Even when it comes to charging time the V8 takes an insane 4.5 hours to reach completion. That’s staggering. Xiaomi on the other hand still takes about 2.5 hours. But still much better than the Dyson.

Price is one of the most important factors when buying a vacuum. this is because it should ideally be a one-time investment that will help you clean your house for years to come. And between Xiaomi and Dyson.

Xiaomi is the clear winner. Like all Xiaomi products, the Roidmi F8 is priced very aggressively at $325 as opposed to Dyson’s $598. That much difference with respect to price is a heavy blow for Dyson. However, Dyson’s price is almost double that of Xiaomi. It offers a decent warranty period of 2 years.

Although the above factors are the most important, it doesn’t mean we shouldn’t consider the other features such as attachments. While both share similar attachments such as the wall mount/charging dock, they do differ considerably when it comes to the vacuum attachments.

For the most bit, they do have attachments that can deep clean and tools to target gaps and cracks. They both also have powerful brushes of meat for furniture. While Dyson V8 has provided a powerful motor enchasing attachment, it isn’t as helpful as the Xiaomi pet hair attachment that not only gets rid of the stains and pet hair but can also be used to get rid of dust mites. So, when it comes to attachments, Xiaomi is the clear winner.

Xiaomi’s Roidmi F8 Has trumped Dyson’s V8 with respect to Price, Design, and battery life. Dyson on the other hand had a minor lead with regards to Power and Capacity. The winner without a doubt is Roidmi F8. So, with regards to this long-lasting rivalry, Xiaomi has finally come ahead.

Is Xiaomi vacuum better than Dyson?

Xiaomi features many vacuums in its repertoire under different brands like Roidmi, Dreame, and more There are some vacuums that are better than Dyson while some fall short. The main advantage of Xiaomi vacuums is that they offer the most value for your money.

Is Roidmi same as Xiaomi?

Yes, Roidmi is a sub-brand of Xiaomi so one can say that they are the same. Roidmi was founded in 2015 by Xiaomi and operates in over 60+ countries. Roidmi follows the same values as Xiaomi and offers products that prioritize value for money. This has made the company popular even in western markets.

Is Roidmi under Xiaomi?

Yes, Roidmi is owned and funded by Xiaomi. The company was founded in 2015 and since then has been a part of the Xiaomi ecosystem.

Are Dyson vacuums really worth the money?

If you have a lot of money then by all means invest in a Dyson. However, is it absolutely worth it? No. There are vacuums out there such as Xiaomi Roidmi Vacuum Cleaners that offer pretty much the same power and technology and is almost half the price of Dyson Vacuums. In addition to the cheaper price these vacuums also have a higher battery life than Dyson. Check out our guide on Xiaomi Roidmi vs Dyson for more details.

Which Xiaomi cordless vacuum is the best?

Although there are numerous Xiaomi Vaccum, the Roidmi F8 is the best of the best. Not only is perfectly priced at $325. This mid-range beast also has an exceptional design and build in addition to battery life. Check out our guide on Xiaomi Roidmi vs Dyson for more details. 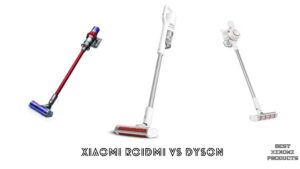 Check out Xiaomi Roidmi vs Dyson