Home Gadgets Xiaomi vs Oppo vs Vivo 2022 | Who makes the Best Smartphones?
GadgetsSmartphones 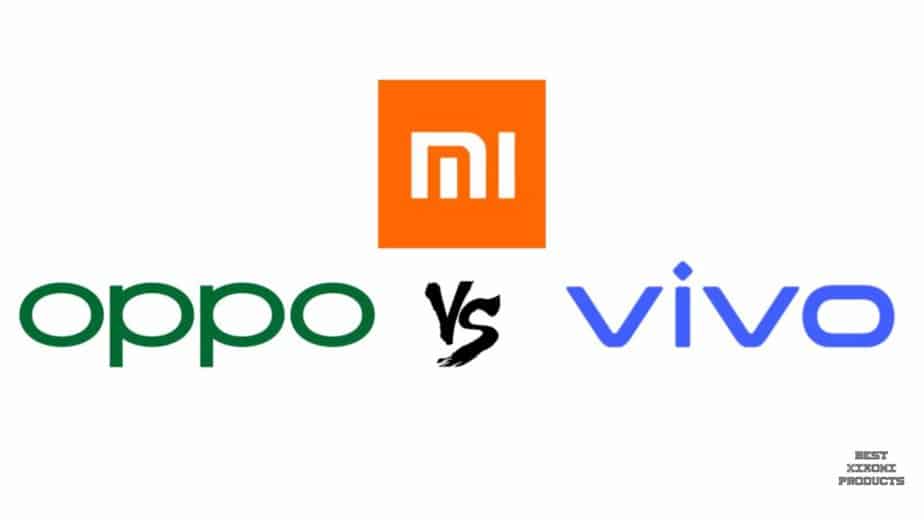 Xiaomi, Oppo, and Vivo are known for offering premium smartphones at affordable rates. But who is the best among them? Check out our Xiaomi vs Oppo vs Vivo comparison.

I have always been the kind of person who switches smartphones quite often. Why? Simply because many companies tend to launch smartphones with newer specs making it rather hard to stick to one. I’ve used OnePlus, Nokia, Motorola, Asus, and so many others, now my predicament lies with choosing between Xiaomi vs Oppo vs Vivo.

The ability to price their smartphones at low rates is mainly to do with the fact that raw materials are obtained from local sources making the production of these items cost much lower than Apple or Samsung.

Throughout this article I will take you through the top three segments of smartphones, the high-end or the flagship killers, the mid-range smartphones, and the budget-friendly devices to see which of these are better in terms of the hardware used, camera setup, and battery capacity.

So let’s take a look at the comparison between Xiaomi vs Oppo vs Vivo.

Xiaomi vs Oppo vs Vivo

Alright, let’s start by clearing something up for everyone. Oppo and Vivo are two companies parented by the Chinese company, BBK Electronics. So, though we’re looking at three companies in this comparison, in reality, it’s only two considering Oppo and Vivo follow a similar business model and product standards.

In terms of marketing, Xiaomi’s model is to manage their releases and advertisements through word of mouth and social media posts, Oppo and Vivo are the exact opposite by churning out advertisements as often as they can.

Oppo and Vivo have managed to have steady growth in countries like India, Singapore, Thailand, and other South Asian countries thanks to their approach, despite this Xiaomi have always been the choice for many mainly because they tend to deliver high-end smartphones for fractions of the price.

A Chinese multinational electronics company based in Beijing, Xiaomi has been in the market for the last 10 years with its smartphones and IoT products, from smart home devices to laptops, bags, software, and more.

With a presence in almost 90+ countries, Xiaomi is growing at a steady pace and has already managed to attain the #6 spot among the top 10 smartphone companies in the world.

Along with their affordable products and the focus on delivering the latest and best, Xiaomi has left a long-lasting impression in the minds of millions of users.

Oppo or Guangdong Oppo Mobile Telecommunications Corp. Ltd. is based in Guangdong, China is a consumer electronics sub-brand of BBK Electronics. Specializing in smartphones apart from audio devices and other electronic products.

Currently, Oppo has acquired a strong market base across the globe and is currently ranked at #4 in terms of worldwide market share.

Oppo has a range of smartphones that have been launched in a specific series of names such as the Oppo F series: Oppo F15, Oppo F17 Pro; the A-series: Oppo A33, Oppo A92, and many others.

Vivo is the sister company of Oppo and has been around for about 11 years. Based in Guangdong, China, Vivo designs smartphones along with accessories, software, and other online services.

Last year, Vivo was hailed as the first smartphone company after Apple to feature a notch display with their V9 range of smartphones.

Vivo stands at #5 among the top 10 smartphone companies in the world just after its sister company, Oppo.

Considered Flagship Killers, all three models were launched earlier this year to target the 5G market. The Mi 11 Ultra, Oppo Find X5, and the X70 Pro+ are powered by the Octa-Core Qualcomm Snapdragon 888 and run on Android 12.

All three devices come with an extremely customizable version of Android 12 and are built using flagship-worthy hardware making them nearly identical in most usage scenarios.

The Oppo Find X5 Pro has the most brilliant display, a 6.7” OLED screen that has a Quad HD+ resolution to deliver up to 1 billion colors and supports a refresh rate of up to 120Hz, and comes with HDR 10+ certification.

Oppo Find X5 is equipped with a Quad camera set up while the Mi 11 Ultra and the Vivo X70 Pro+ come with a Triple-Camera setup.

Xiaomi’s Mi 11 Ultra is considered to be the best smartphone camera available in the market and utilizes the 50MP array to produce crisp and clear images with the best resolution around.

With a 50MP Quad-camera setup on the X70 Pro+, you get better stabilization and better video recording functionalities.

Verdict: The ultimate performer is the Xiaomi Mi 11 Ultra. However, it can be considered a tie because the Oppo Find X5 Pro is waterproof.

Three Mid-range smartphones which have roughly the same screen size and come with 18W Fast Charging while running on Android v10 are budget-friendly devices that have impressive specifications while costing less than others in the same category.

In terms of storage, all 3 smartphones come with 6 GB RAM and 128 gigs of internal storage which is expandable only in the case of the Redmi Note 11 Pro.

All three devices come with an extremely customizable version of Android 10 and are built using flagship-worthy hardware making them nearly identical in most usage scenarios.

Xiaomi Redmi Note 11 Pro falls in second with a slightly larger display at a 6.67” AMOLED panel with a resolution of 1080*2400 and lower pixel density.

Whereas, the Vivo Y51s would fall in last place with their smaller screen size of 6.55” IPS LCD and lower pixel density at 269ppi.

The Vivo Y22 and the Oppo A96 are fitted with a 50MP dual-camera setup while the Note 11 Pro comes with a 108MP triple camera setup.

With a powerful CMOS image sensor, the Redmi Note 11 Pro delivers far superior image quality and clarity when compared to the A96 and the Y22.

However, in terms of front-facing selfie cameras, Oppo and Xiaomi are lined with a 16MP primary camera for better Selfies. The Vivo Y22 comes with a single 8MP selfie camera.

The largest and most powerful battery in this segment belongs to the Redmi Note 11 Pro with a 5000mAh Li-polymer battery that is capable of Fast Charge at 67W.

Verdict: The Xiaomi Note 11 Pro is hands down the better smartphone among the 3 mentioned above with superior specifications and Fast Charging making it an ideal Mid-Range smartphone to buy.

These budget-friendly smartphones were launched earlier this year to give way to newer models in this section. All 3 devices run on Android 10 right out of the box and come with Fast Charging.

Ultimately, all three devices come with storage variants and though the Oppo and Vivo devices start with 4 gigabytes of RAM with 64 gigs of internal storage, the Redmi 9 starts with 3GB RAM and 32GB internal storage.

Apart from using Gorilla glass 3 on all three devices, each one is special in its way.

See also  What you need to know about MIUI 13

Another primary difference between the display of all three smartphones is that with the Oppo A73, the fingerprint sensor is situated beneath the display.

In terms of camera setup, the best array comes with the Oppo A73 followed by the Redmi 9, and finally the Vivo U1x.

All three smartphones come with HDR recording at 1080p@30fps.

As specified earlier, all 3 smartphones have 18W fast charging but the largest battery would be that of the Redmi 9, a Li-polymer 5020mAh nonremovable battery with fast charging capabilities.

Verdict: Oppo A73 wins in terms of overall performance as a result of the 30W Fast Charging capabilities.

To summarize from the article Xiaomi vs Oppo vs Vivo, it is evident that the preferred choice would be the Xiaomi series for hard-core users and gamers alike. However, it does lack a few features that Oppo has proactively included in their smartphones range making it a rather tough comparison.

At the end of the day, I recommend the Xiaomi Mi10 Ultra and the Redmi Note 9 Pro for those looking for something that has a premium build, high specs, and is all-rounder in their respective classes.

Those looking to explore something new and different or are into photography can opt for the Oppo series as they provide some top-notch camera features and can be used by all, with no specific age group in mind.

Vivo on the other hand would not be a recommendation simply because the hardware used is from the previous generation and the design is kind of similar to all the latest models. The one thing which stands out with Vivo is the display and clarity it produces.

It’s up to you to make the final decision based on your preference and the budget at hand.

Which Oppo phone is the best?

Currently, the Find X2 Pro is rated as the most premium and accomplished smartphone from Oppo and is their one phone that can be compared with the OnePlus series and Xiaomi Mi10 series.

Which is better, Oppo or Vivo?

While taking the Find X2 Pro and the X50 Pro+ into consideration, Oppo has done a remarkable job with a larger display with better clarity, it is the Vivo X50 Pro+ that emerges to be the better choice with a better camera and larger battery capacity and a lower retail price.

Is Xiaomi better than Samsung?

In practical use, yes. Xiaomi has been known to follow Samsung’s strategy of copying Apple. The only difference is that Xiaomi does this way better than Samsung. The secret here is that Xiaomi matched the specifications of top-end phones like Samsung and Apple while keeping their devices in the affordable range, unlike Samsung.

Why is Xiaomi not good?

Xiaomi phones have poor thermal management and software. This doesn’t get better with oppo or Vivio either, all three companies have poor software compared to the likes of Apple, Samsung and Google.

Is Oppo better than Vivo?

They are both fairly equal. Both Oppo and Vivo offer similar specs for the price. I would go with Oppo for lower and mid-range phones while I would pick Vivo for their premium offerings. This is because Oppo’s mid-range and low-end phones are better than Vivo and conversely Vivo offers better high-end phones.

Which is better MI or Vivo?

I would go with Mi as they offer better value for money without compromising on anything. Vivo is almost always costlier than Xiaomi while offering no significant upgrade.

Is Oppo better than MI?

No, Oppo is similar to Vivo which is not as good as Xiaomi. So, Xiaomi is better than Oppo. Xiaomi offers better specs and a cleaner design for lower prices.